Melbourne property market heats up over summer amid pent-up demand, no overseas travel

On a rainy Wednesday evening two days before Christmas, Scott and Melanie McCarthy sold their four-bedroom home in suburban Taylors Hill at a wet, but well-attended auction.

“We were a little bit nervous about selling so close to Christmas, but our agent knew we had a bit of a deadline and he had a lot of confidence in the strength of the market,” says Mr McCarthy, who moved to Brisbane with his family for a new job and a lifestyle change just five days later.

In any other year, auctioning a home at 5pm on a weekday evening two days out from Christmas might seem unusual. But 2020 was no ordinary year, and there has been little downtime over the Christmas holiday period, normally ghostly quiet for property sales.

The McCarthys’ home sold for $998,500 – setting a new record for a single-storey home in the area.

“It sold well over what we had expected, and the timing worked out really well in the end. We couldn’t have been happier,” Mr McCarthy said.

“[Our agent] really sort of encouraged us to go to auction despite it being so close to Christmas, and we’re really glad we listened to him.”

The selling agent, George Skizas from Ray White Taylors Lakes, said he had every confidence in getting a good price for the “well-built” home so close to Christmas, given the pent up demand in the market after Melbourne’s extended lockdown. 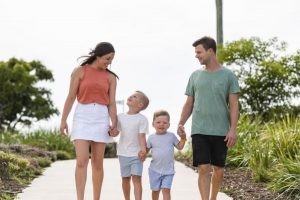 “I think a lot of people were just really keen to buy something they could move into early in the new year after the year we had. In the end, we had five active bidders,” he said.

“There are a lot of buyers who miss out on properties in November and early December, and traditionally there’s not a lot of properties on the market, and people have to wait well into the next year.”

Ray White Victoria and Tasmania chief executive Stephen Dullens says that pent up demand saw the company break sales records in December, at a time when auctions are typically winding down, and continue in January.

“We had our first auction on January 7, when normally our first auctions would be on the last weekend of January or the Australia Day weekend, but buyer activity has kicked off a good two or three weeks earlier than usual,” he said.

Transactions over the summer holiday period have been boosted by the fact that far fewer people are travelling.

Open for inspection attendance was up 13.5 per cent for Melbourne houses over the four weeks to January 17 than during the same period a year earlier, Domain data shows.

“The year has definitely kicked off a lot earlier than it normally would,” says Andrew Crotty, from Biggin & Scott Richmond.

“We’ve already sold 10 properties in January; we sold more than 30 in December when normally we’d do about half of that.

“One of the factors at play in that is that people aren’t travelling overseas at the moment, so they’re still keeping an eye on properties, and they’re on the phone to us, even if they are down the beach.

“It’s a lot easier to do that from the beach than it is from Europe. We’re even finding that a lot of people didn’t even want to take the risk of travelling interstate.”

Nelson Alexander director Nicholas West, who says the company had a record month in December, adds that people’s changing circumstances post-lockdown have also led to increased transactions over the summer holiday period.

“We’ve seen people coming out of lockdown who are reassessing all sorts of things when it comes to their living arrangements and accommodation needs,” he said.

“People were rethinking all those things, while there was that pause in the market, which has brought about a whole wave of activity since lockdown.”

Mr West says the large volume of foot traffic so early in the year shows that people are prepared to forego some time at the beach to make the property and lifestyle changes they decided to make while in lockdown.

“We haven’t had a huge amount of activity in terms of auctions just yet, but we’ve certainly sold a number of properties right through Christmas and early January, so people are still committed to making decisions and making changes at a time of year that is traditionally that little bit quieter.”